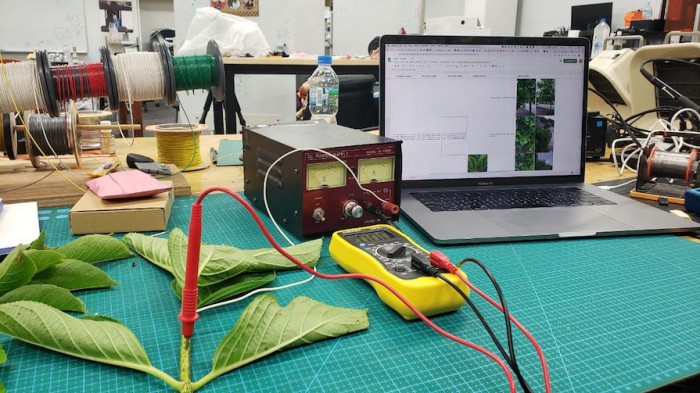 What if trees could provide electricity to cities? Imagine the tangle of power lines, clunky solar panels, or bird-killing wind turbines replaced by beautiful and lush green groves that double as clean energy generators.

This surrealist idyll isn’t too far-fetched, say a team of researchers from China, Italy and Japan. They’ve been working to harvest usable electricity from plants by experimenting with the “triboelectric” effect in tree foliage. The phenomenon occurs when certain materials that rub against each are pried apart, akin to how static electricity is generated. (The word “tribo” means “friction” in Greek.) As thrilling as this sounds, graduate students from Keio University in Tokyo have also paused to think through the ethical implications of such a powerful technology.

Colombian-American industrial designer Catalina Lotero is part of the multi-disciplinary team, and explained their work at the recent Design Indaba conference in Cape Town.

Leaves, which are positively charged, produce small amounts of electricity when they come in contact with the tree trunk or any other negatively-charged material Lotero says. The team is looking to build out this energy capacity into a “biological microgrid” called Raiki. They envision the technology as an alternative for communities underserved by traditional grids.

To transform trees to efficient power generators, Lotero and her classmates used synthetic biology techniques—a.k.a. genetic engineering—on an elm tree. They tweaked the branch formation, increased the leaf thickness and density, added a pest-repellent gene, and accelerated its growth rate.

Their plan involves collecting electricity from leaves which will be coursed through the trunk to a subterranean pipe and battery that will, in theory, store 103 kH/h of power.

At one point, they even thought about trying to redesign the basic shape of a tree to make it more efficient. “Granted, we didn’t really understand how synthetic biology worked, so our first idea was to make the tree look like they came from Avatar,” she explains, referring to the towering hometrees (or Kelutral in Na’vi) with honeycombed trunks featured in James Cameron’s blockbuster franchise. They also entertained bizarre and bulbous tree shapes from an illustrated encyclopedia by the Italian designer Luigi Serafini and considered adapting the weeping willow from the video game Adventure Time. In the end, they realized that nature had actually designed the best shape for storing and generating energy.

The project, which is financially supported by Tokyo Gas, is in its nascent stag, but its core idea is intoxicating. Having the ability to harness the energy from the fluttering of leaves offers an alternative to fossil fuels, not to mention the blight of poorly-engineered green tech infrastructure. “When fully grown, one tree can power seven American houses,” explains Lotero, “And Americans consume a lot of energy!”

Although research teams are pushing to make electrified trees a reality, it will take decades before such technology can be commercially viable. For one, the process is dependent on the natural growth cycle of trees—elms take 40 years to mature.

In this development arc, Lotero and her teammates are reflecting on the ethical implications of their aspirations. They began to speculate about Raiki’s negative impact on plant diversity, should the technology be successful “What if people get excited about trees and take down crops, fruit trees, and everything else…What would happen to wildlife?,” Lotero mused. “And is it ethically correct to use something that’s alive and tweak it like a product?”

Notably, Lotero and her team built some time into their project plan to consider these questions at the outset.

Introducing a pause button in the product development plan is rare, yet so badly needed if designers are to mitigate the unintended consequences of their work. Confronting the shadowy side of design was the theme of a 2015 MoMA initiative called “Design and Violence.” Curator Paola Antonelli writes:

Design needs a thorough reality check. From buildings and clothing to toasters, posters, and cities, too often and naïvely…[we] only celebrate the positive impact that design artifacts have on our everyday experiences. However, design also has a history of violence that, unless linked overtly to political and social suppression and upheaval, often goes unexplored.

Tech companies are increasingly turning to ethicists to think through the implications of their AI-driven products before they go ahead. San Francisco’s Unintended Consequences of Technology lab is one rare forum where early-stage start-ups can grapple with the ramifications of their ideas before a public launch.

Lotero tells Quartz that it’s useful to have a corporate funder who is sympathetic to the ups and downs of innovation, and that they haven’t felt any pressure from Tokyo Gas to speed up Raiki’s development. Instead, they provide reports and employee workshops on their work.

“I think as designers, researchers, architects, scientists, and everyone else who’s designing the future, we really have to take the time to think of the worst case scenarios for every project,” says Lotero, noting that grappling with the effects of synthetic biology is part of their goal. “This is so important, especially now that we’re desperate for solutions to save the planet.”