Reflections on AI: Are humans up to the task of controlling what they’ve built? – SiliconANGLE

Reflections on AI: Are humans up to the task of controlling what they’ve built? – SiliconANGLE 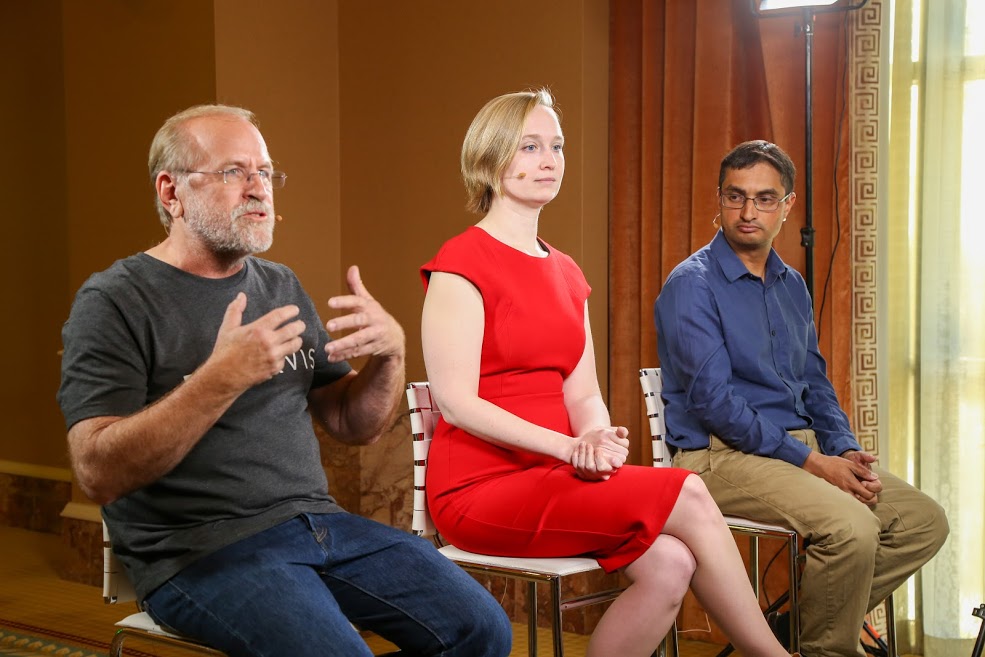 Thanks to artificial intelligence and facial-recognition technology, mirrors in retail stores are now making judgments about people reflected in the glass. Is that progress or a descent into digital apocalypse?

This was a question recently pondered by Bob Friday (at left), vice president and chief technology officer of Mist, a Juniper company, as he strolled through a shopping mall one recent afternoon. It was not idle musing on Friday’s part either, because he’s played a significant role over the past 30 years in the development of wireless technologies and the use of AI tools to support them.

“This is very personal,” Friday said. “AI in a bunch of mirrors calling me old? That’s a little annoying.”

Friday spoke with Jeff Frick (@JeffFrick), host of theCUBE, SiliconANGLE Media’s mobile livestreaming studio, during an Unpacking AI discussion at the Juniper NXTWORK event in Las Vegas. He was joined by Charna Parkey (pictured, center), applied scientist at Textio Inc., and Rajen Sheth (pictured, right), vice president of product management, Google Cloud AI, at Google LLC. They discussed how AI is being applied for various use cases in the enterprise, the technology’s growing impact on edge computing, potential regulation in the industry, and the far-reaching influence AI is expected to have (see the full interview with transcript here). (* Disclosure below.)

Friday’s annoyance at being called out by a mirror is one of the many subplots surrounding AI and its growing impact on business and society. Concerns about ethics and bias and unease that machines will replace humans are just a few on the controversies swirling around AI today.

Still, adoption of the technology is expanding rapidly with enterprise growth reported to be 270% over the past four years. And the use cases are multiplying.

Part of Mist’s focus has been on processing customer data through long short-term memory, or LSTM, an artificial recurrent neural network architecture that plays a key role in deep learning.

“Great wine starts with great grapes, and great AI starts with great data,” Friday said. “We’re really using the last 30 days of data to train LSTM algorithms to get to the point with tsunami detection that we don’t have false positives. Neural networks are one of the transformational things that really moved AI into the reality column.”

Textio offers a different use case for AI, one that is setting out to redefine augmented writing to the point where machines can predict what a user wants to say. Some of the startup’s customers are using Textio’s technology to improve the hiring process and entice the most ideal applicants.

Using AI, Textio can help enterprises align words with company culture and convey the kind of impression that will yield desired results.

“The thing I’m most excited about with AI right now is the addition of creativity to a lot of our jobs,” said Textio’s Parkey, who described the benefits gained by people who leveraged smart technology to express sentiments closest to what they feel. “They get to use language that has never been used before to communicate an idea.”

One of the companies that has been pushing the AI envelope for quite some time is Google. Just in the past month, the search giant released a new feature to let users check pronunciation of words, disclosed research around AI’s ability to correctly identify smells, and beat top human players in a popular video game.

In 2017, Google introduced “Federated Learning” as a way for mobile phones to learn a shared prediction model while keeping data native to the device.

“One exciting development is around Federated Learning, where you can train on the edge and combine some of those aspects into a cloud site model,” Sheth explained. “What we see a lot of customers do is training on the cloud but performing inference on the edge. That will actually make edge even more powerful.”

Keeping humans in the loop

While the use cases for AI have helped push the technology forward, the companies on the cutting edge have also been mindful of the need for caution. AI is becoming the ultimate highly charged “third rail” for the tech world.

Issues around responsible use of AI have become so controversial that Google took the unusual step of developing and publishing its own principles around how the technology could and could not be used by the company. One of the areas where Google has drawn the line involves the use of facial-recognition technology. While its competitors Amazon Web Services Inc. and Microsoft Corp. offer the technology for its customers to adapt for their own use, Google’s cloud division declared last year that it would not.

“We now have to look at everything that we’re doing against those AI principles,” Sheth said. “That governance process is something we’re doing, but I think it’s something that every company is going to need to do.”

If companies don’t initiate a set of principles governing the use of AI as Google has done, the government may do it for them. In October, the Illinois state legislature unanimously approved the Artificial Intelligence Video Interview Act, which required consent and data destruction from employers using AI in the hiring process.

At the very least, leaders in the AI industry are recognizing that the days of complete machine autonomy have not yet arrived.

This month, approximately 100 programmers are expected to take part in the National Novel Generation Month challenge, a project to build AI-powered programs that can generate 50,000-word novels. Researchers believe that AI will be composing bestselling novels in the future, and this is merely the warm-up act.

“Every company and every product will be fundamentally transformed by AI over the course of the next decade,” Sheth said. “It’s actually going to have a bigger impact than the internet itself. That’s what we have to look forward to.”

Watch the complete video interview below. (* Disclosure: Juniper Networks Inc. sponsored this segment of theCUBE. Neither Juniper nor other sponsors have editorial control over content on theCUBE or SiliconANGLE.)

… We’d like to tell you about our mission and how you can help us fulfill it. SiliconANGLE Media Inc.’s business model is based on the intrinsic value of the content, not advertising. Unlike many online publications, we don’t have a paywall or run banner advertising, because we want to keep our journalism open, without influence or the need to chase traffic.The journalism, reporting and commentary on SiliconANGLE — along with live, unscripted video from our Silicon Valley studio and globe-trotting video teams at theCUBE — take a lot of hard work, time and money. Keeping the quality high requires the support of sponsors who are aligned with our vision of ad-free journalism content.

If you like the reporting, video interviews and other ad-free content here, please take a moment to check out a sample of the video content supported by our sponsors, tweet your support, and keep coming back to SiliconANGLE.